The presence of Leo brightens every room 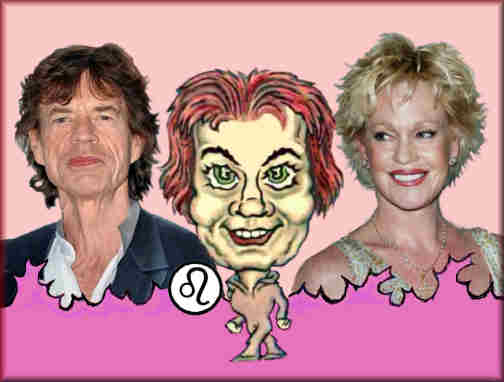 When Mick Jagger and Melanie Griffith fix themselves on stage, the warm glow of fire brightly shines.  As their facial elements lock onto their firery hold, the theatrical gestures and showy appearance of Leo becomes obvious.

The traits of a lion are easily seen in the physical appearance of Leo Suns and Rising Signs. Watch for the cubical shapes of fixity: The lion’s mane, the bushy eyebrows, the feline eyes, the broad and stubby nose, and the jowly cheeks that set on a rectangular jaw.

You may instantly recognize them, as they strut into the room–with their barrel-chested torsos leading the way.  Add all of these gestures together, and it becomes the image of a lion.

Since the Sun is the ruler of Leo, persons with prominent aspects to their Suns often show the fixed and fiery appearance of Leo.
Other Fixed Signs are Scorpio, Aquarius and Taurus 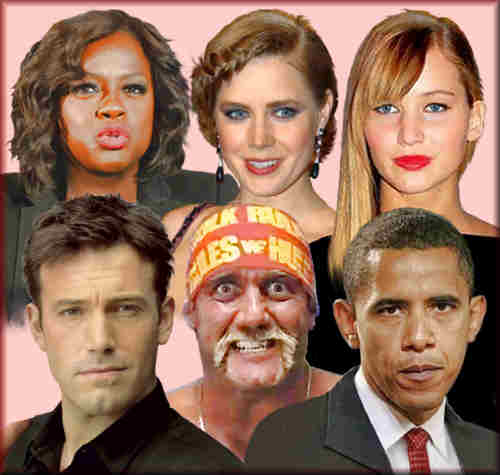 Here, with a photo collage of faces, we show six celebrities who share the demeanor and mannerisms of Fixed Fire and the physical appearance of Leo.  Here, we will also show how different astrological components alter the disposition and personality of these celebrities.

This is the sign that governs theater and drama–so expect these six Leo Sun Signs to put on a show!

Leo’s aura of confidence is seen in all of our female felines. Viola Davis and Amy Adams show the fixed expression that we see–just before they make their royal decrees.  Jennifer Lawrence shows us the moment after, when the feline eyes fix in place, to await the roar of approval from the crowd.

With the male lions, Leo’s traits can be carried to extremes–for they can be loud and boisterous, or markedly classy.  The loud side of this equation was seen in the actions of wrestler Hulk Hogan, when he boasted of his power and strength in the ring.  In contract, the  gestures of Ben Affeck and Barrack Obama radiated an aura of dignity, as they presented their grand visions to the world.

The next Sign is Virgo
View it on Top Menu