View the Suns, Moons and Rising Signs of Celebrities 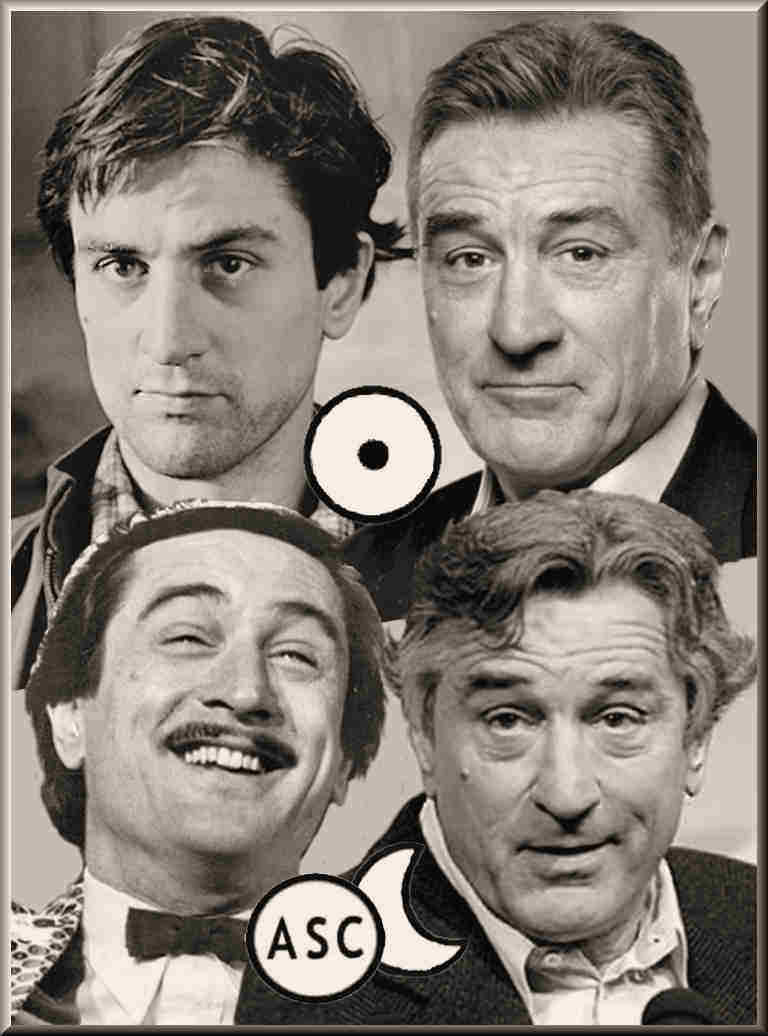 As one of the consummate actors of his generation, Robert DeNiro shows the flare and dramatic characteristics of Leo.  In contrast, in many of his roles, he’s often plays characters with a disturbing and darker edge. This is due to the other components in his chart.

Early on, this left some of us guessing that this star of Taxi Driver and Deer Hunter was “heavy Scorpio”.  As his chart revealed, he has no Scorpio (save for a empty fifth house).  However, he does have Pluto, Jupiter and his North Node all in Leo, progressively forming a loose conjunction with his Leo Sun.  This powerful grouping gives him a concentration of fixed energy.  Furthermore, a Mars in Taurus (square his Sun) makes his physical movements firm and fixed.  Add a water Ascendant and Moon to this, and our guess becomes technically correct.

In previous Snapshots, we mentioned how the placement of the Ascendant’s ruler gives a way for individuals to “embellish on their public mask”.  Robert DeNiro’s Cancer Ascendant is ruled by the Moon and his Moon is in Pisces.  Consequently, he has an ability to miraculously alter his appearance.  These components douse the fire we see in his Leo personality.

In his role in Raging Bull, Robert  set a new standard in film performance by totally changing his physical being—turning from lean to muscular, then pudgy to overweight.  Likely, his Piscean emotional temperament helped him make the sacrifices for this very demanding role.

In the film Awakenings, DeNiro portrayed one of his quieter and finest roles as a patient emerging from Neptune’s net to regain conscious expression.  Unhampered by ego or physical desire, we saw a person who expressed his lunar feelings by openly reacting to the world with bewilderment, amazement and joy!  Robert’s boisterous Leo personality was nowhere to be see.

Note how in his reactions, DeNiro’s rounded water features become distorted.  The resultant skewed facial lines give him a dreamy, disarming appearance.  Positively, this lunar placement adds a compassionate dimension to his normally self centered Sun energies

Regardless of how bizarre the role, Robert DeNiro often shows a softer side—something not expected in the flamboyant characteristics of Leo.  This “sensitive nature” is displayed in Robert’s watery Cancer Ascendant.

In the film King of Comedy captured the dramatic extremes of a “lion/crab” combination. There, Robert played an obsessed comic who kidnaps a famous talk show host. Throughout the movie, this loud mouthed “King” would throw his solar tantrums, but sporadically gushes of emotions would swell to the surface—to round his facial features and mask his fires. In these quiet (non-ego) moments, he would hover over his victim like a mothering hen. This protective presence was also noticeable in his relationship with Jody Foster in Taxi Driver.