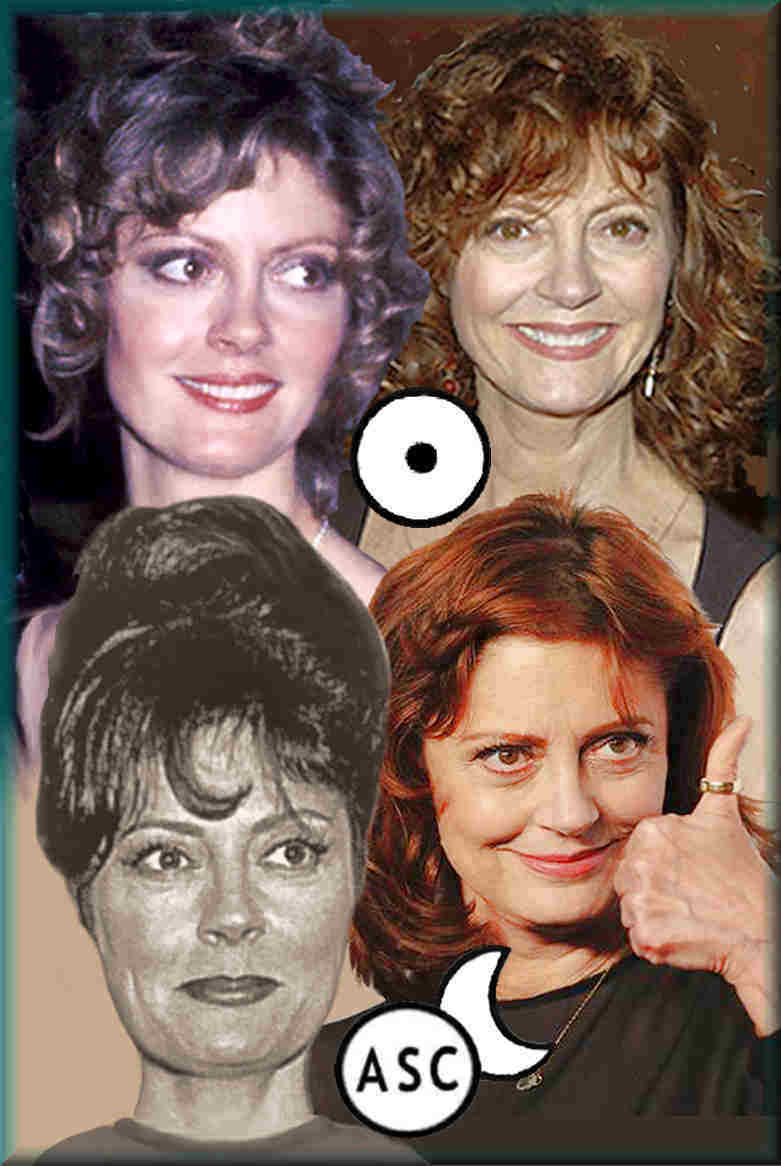 It's all a product of Nature's cycles of light

Early on, this star exhibited a rare ability to be thoughtful, sexy and controversial.  However, her personality and psychological nature was also tough and rugged–it was not the sugary, cream-puff image assigned to most ex-models, who also share her Libra Sun.  This hard edged side of her personality can be attributed to her Capricorn Moon and Ascendant.  This injection of Cardinal Earth drives her to correct the imbalances in the social scales.  That is why she is a social activism, much like John Lennon (who also was a Libra with a Capricorn Moon).

Susan first attracted a following as the cheerful suburbanite in The Rocky Horror Picture Show. This film set the tone for her unorthodox and often provocative early career, as she played soft and sensual creatures caught up in greater turns of events. With Venus on her midheaven, Susan easily showed us the sensual and sexy qualities of her Venus ruled Sun sign. She played the brothel bound mom of Brook Shields in Pretty Baby. She and Catherine Deneuve (another Libra) raised eyebrows in The Hunger and she earned her first Oscar nod as a hapless casino worker in the seedy underbelly of Atlantic City.   This Venusian creative drive was enhanced by the cardinal force of her Capricorn Moon and Ascendant.

With her Capricorn Moon, Susan Sarandon has the steely emotional disposition and tenacity, to make her own social statements—be it in films or in political speeches.  This Libra’s desire for social justice was seen in her 1995 film Dead Man Walking.  Directed and produced by her Libra companion Tim Robbins, this film showed us how Libras have a remarkable gift for communicating both sides of complex issues. On this film, Susan won her first Oscar for Best Actress!
Through the years, Sarandon’s career continued on its steady upward climb, seemingly acquiring more success as she becomes older. Saturn (Capricorn’s ruling planet) gives her the gift of “improving with time”—all so gracefully! When she entered her 40’s, she turned the tables and successfully portrayed the rare roles of seductive older women in White Palace and Bull Durham. Then came Thelma & Louise, Lorenso’s Oil and The Client—and three more Oscar nominations!
Physically, Susan’s Capricorn Ascendant gives her a stolid personality and psychological nature.  The wide, high placed cheek bones give her a serious appearance. With her Moon conjunct the Ascendant, the airy forces of her Sun are often held in the solidity of Earth. With this presence of Capricorn, Susan can appear emotionally cold and solemn. Positively, it gives her a businesslike appearance and an aura of authority.

View SCORPIO Whoppi Goldberg Snapshot
and others on Menu at top of page
You can see updated “Snapshots of 235 celebrities” in our 3rd book “Portraits of Personality”.
(See our bookstore for more details).