Sagittarius and the Tongue of Kali

Sagittarius and the Tongue of Kali

Our previous post of “Astrological Oddities” captured several Sagittarius celebrities performing their “tongue in cheek” expressions.  One response to this was from my astrologer friend Carol, who sent me a picture, noting the tongue of Kali, the Hindu Goddess.  Kali’s long tongue is extended outward–just like we saw in our facial photos of Centaur celebrities. This Tongue of Kali piqued my curiosity.

In the image, I saw Kali’s bloody sword and the snakes–they certainly fit our western interpretation of Scorpio. On Kali’s other hand, there is the bowl of fire and the Archer’s bow–symbols of the Sagittarius Centaur. 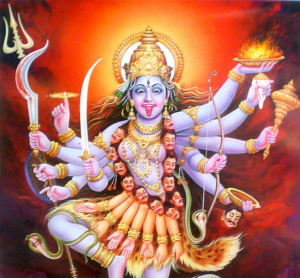 These image elements appear to parallel the concept of the astrological transition from the feminine sign of Scorpio into the masculine sign of Sagittarius. My next step was to understand the meaning of this Hindu deity–and then determine if there were any Hindu celebration dates, that correlated to those in the astrology signs.

With limited research, I concluded that this Hindu Goddess is another representation of the divine creative process that we see in Nature.

Kali is the Hindu goddess who is often associated with sexuality and violence, but is also considered to be symbolic of motherly-love. The Goddess Kali shares “the fullness of time” with her masculine counterpart “Kāla”.  These two figures both represent the dueling cycles of time within Nature–the process that bring things to life, and then to death. (For her followers, it is likely more complex than that, but I am trying to be brief).

With further research, I discovered that this year’s annual celebration of the Goddess KALI will be occurring in India on October 19–in less than a week from this publication date. (Is that serendipitous or what?).  Interestingly, this event is always on the New Moon in the Hindu month of Karlik–the time that occurs just before or near the Sun’s entrance into Scorpio.

So let’s look at KALA, the fearsome form of Lord Shiva–who is the masculine side in this equation.  Kala’s foremost celebration is called Kalabhairav Jayanti.  It is on the 8th day of the waning phase of the Moon (also in this Hindu lunar month of ‘Kartik’). In the Gregorian calendar, this date corresponds to the months of mid-November to mid-December. This year, this celebration falls on November 16.  It is less than a week before the Sun enters Sagittarius–the point when astrology’s “Sine-wave of Seasonal Lights” enters a masculine sign.

There it is!  It’s clear that for eons, the dance of the seasonal lights has been celebrated by different cultures around the world– in many wonderful ways.  Why not?  We all are a part of Nature, and Nature is part of us.

Nature’s mysteries are revealed in Scorpio